Disclaimer: This simulation tool is primarily intended for research and public awareness purposes. There are many uncertainties about the infection and transmission of COVID-19 and there are many limitations to this simple model.

Exposed
Asymptomatic
Recovered
Fatal
Active infected
- Mild
- Severe
- Critical
Total cases
Predicted
unreported
0
0
0
0
0
0
0
0
0
Predicted
reported
0
0
0
0
0
0
0
0
0
Actual
reported
-
-
0
0
0
-
-
-
0
Select a parameter to edit on graph:
R0 value: Basic reproduction number  0.0
Transmission rate of unreported exposed, asymptomatic, or mildly-infected individuals
Prediction error: This is an estimate of the error between the predicted data and the real data. Smaller error values indicate a better fit.  0.0
Simulate the effect of interventions such as lockdowns and curfews by clicking and dragging points on the graph.

The COVID-19 pandemic has interrupted the day-to-day life of all Sri Lankans. At the time of writing, the entire country is in lockdown. As of now, due to strict interventions, the disease spread seems to have slowed down. However, it is not completely clear what we should expect in the future, especially when interventions change. To shed some light, we have developed an interactive tool to model the spread of COVID-19 in Sri Lanka using a classical SEIR (Susceptible → Exposed → Infected → Removed (i.e recovered and fatal) infectious disease model. We also modified the model to account for the Sri Lankan setting.

In our model, the entire population is divided into the following classes: 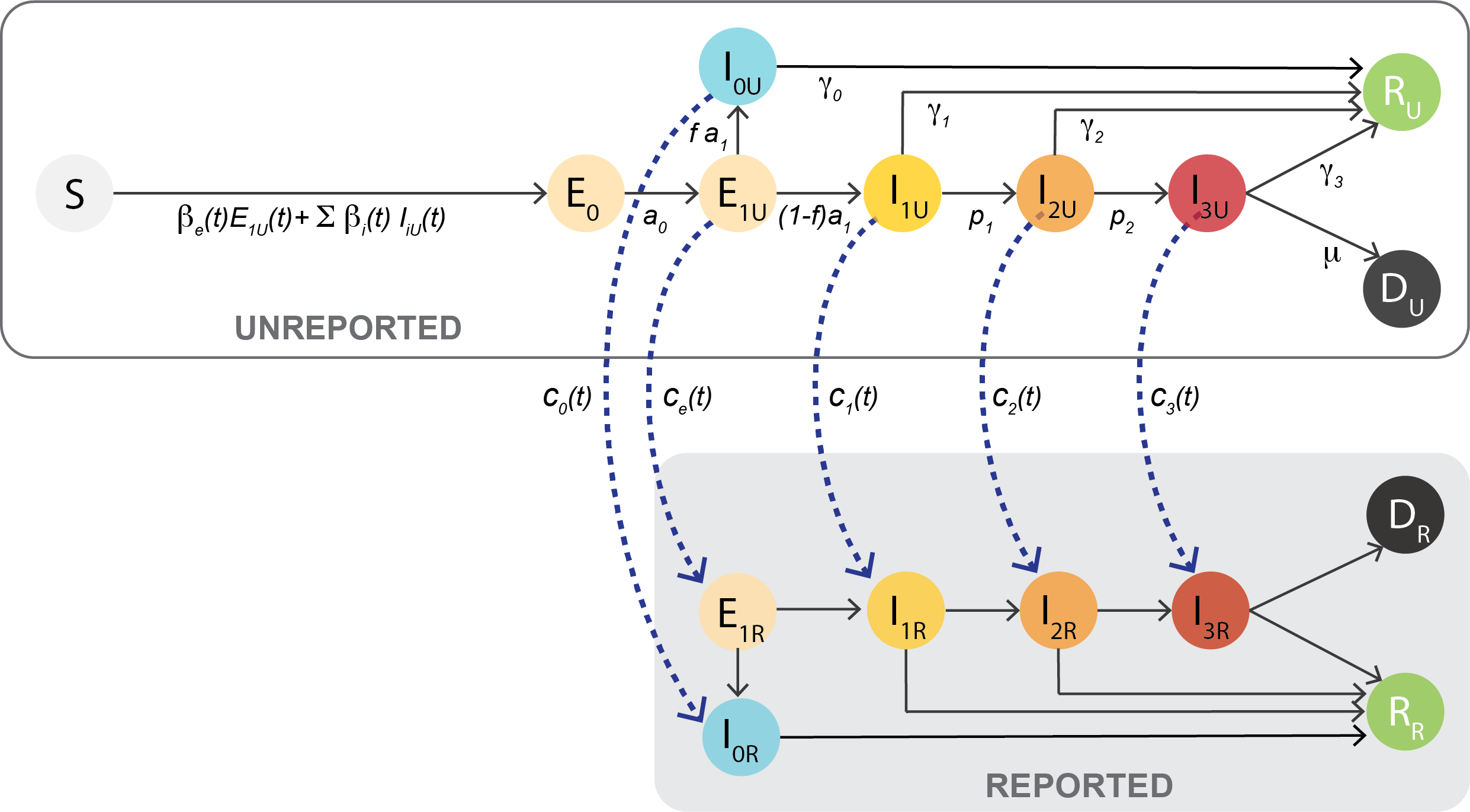 According to literature, roughly 81% of the symptomatic individuals (in \(I_1\)) recover after mild symptoms (in ~6 days) and move to the recovered class (\(R\)). The remaining 19% from \(I_1\) develop severe symptoms and move to the \(I_2\) class. These severe cases require hospitalization. About three-fourths from \(I_2\) recover after hospitalization (in ~4 days), but the remaining one-fourth develop critical symptoms and require ICU treatment. About 40% of the critical cases are fatal and the rest recover after ICU treatment (in ~10 days). These numbers were derived from the published literature of the COVID-19 spread in China, and were used to calculate the rate parameters, \(a_0, a_1, f, \gamma_0, \gamma_1, \gamma_2, \gamma_3, p_1, p_2,\) and \(\mu\).

Next, we had a significant number of infected individuals (tested positive) who entered the country from abroad, but were strictly quarantined before they could infect others. We assumed that all these cases enter the country at the mildly-infected stage (\(I_{1R}\)), although it is possible that they enter during the exposed period as well. When we run the model, we add these cases to the population based on the date they tested positive.

The Javascript code behind this web application is available on Github under an MIT license.

This simulation tool is intended for research purposes, and is provided freely without warranty of any kind.